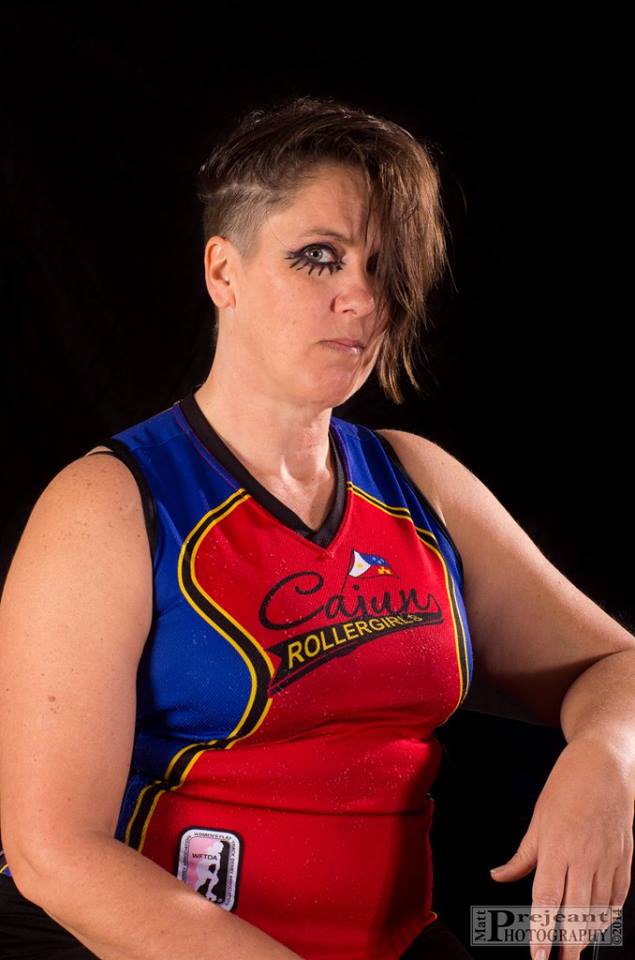 When did you join Cajun Rollergirls?
I joined in October 2008 when it was still only a great idea more than a reality. There was like 6 of us trying to put it and hold it together. We didn’t compete until 2010, but 2009 I wouldn’t trade it for any early success. That payoff is now.

What is your occupation?
I work as a biologist in the Marine Fisheries Division of La Dept of Wildlife and Fisheries.

What is your favorite (derby) position?
Who writes these questions? There are only 2… I’m a blocker, but I will play or do anything that gets me on the track. Coach: “I have one more spot and need a jammer who will also block next jam and jam again after that and then perform a half time skit” Me: *raises hand, eager face* “ME! ME! ME! ME!”

Do you have a pre-bout ritual?
I tend to trash talk. A lot.  I love the game and want to bring that excitement and anticipation to other players and fans, give them a story to want to follow.  Also doesn’t hurt that I give myself the starring role…and those b*tches have it coming anyway…

What are some of your best/favorite moments in roller derby?
Last year I broke my ankle, BAD at practice and knew it instantly. That had to have been the lowest moment in my career that in a moment to think all the hard work, all the time and all of myself that I had put into being Alpha Bitch was done. But the team followed me to hospital and CRG declared the next day Alpha Day and the outpouring of well wishes was more than I could have imagined. That was the best day ever. (The drugs may have helped…)

Who are your heroes?
I honestly don’t idol worship. I see the price people pay for the successes they achieve and am content with the choices I have made. If I wanted that something bad enough, I could get there too. I know it. Rather I admire and respect those in my life that push back on me, my friends, my kids (but shhhh don’t tell them that), they inspire me and give me what I lack in myself. Sensitivity mainly.

Did you skate prior to joining CRG?
Yeah like 3 decades ago. At Champ Rollerdome in Lexington, KY with the disco ball, black lights, Bee Gees, high top custom white skates with teal blue pom poms, YMCA song, and couples skate. I regretted never being part of a couple and had to get (my sad, pathetic, lonely preteen) self off the floor—that was valuable skate time lost.

Do you have a motivational quote?
Ha! I’ve got LOTS of good ones… For derby, the one that sticks with me is an old proverb. It sums up how I think: “Fall down seven times, stand up eight.”

What goes through your brain as you lace up your skates?
Not much. I try to keep myself calm and not focus on distractions, because the adrenaline I can feel…since that Thursday prior. I make sure to stretch well and to pee basically.

Why did you choose Alpha B*tch as your derby name?
The name chose me. It was mine before derby, but derby allowed me to own it in a very public and empowering way.

Do you have a signature move?
No. You hit me, you fall. Period.

How would you describe your derby playing style?
See above.

Any advice for girls who want to join roller derby?
Do it. Don’t think you can’t because I don’t want to %#$*@!& hear it.

Did your background make you a natural fit in assisting with your training?
I played team sports my whole life—boy’s teams. There were no girls’ leagues for me growing up. I think the perspective it has given me, fighting (as a girl) just to be accepted at the same level that is given freely to others (boys) has carried over well into derby.  Never complain (try not to anyway); give your all; do what your coach says; own your actions; know your part and do your job.

What are some of your greatest roller derby accomplishments?
Not sure how to answer this one. It’s a team effort and always will be. CRG has really built something special that goes beyond any win/lose tally–A family, a community, a support structure—and I am proud to be one of the driving, vocal forces behind the scenes making something worth sharing.

How has your involvement in roller derby affected the way you live the rest of your life?
I will compete until I physically can’t anymore and/or there are no more joints that can be bionic-ly enhanced. Then I will probably coach and take all my pent up frustration and anger at not playing out on them.

Anyone you’d like to take the opportunity to thank?
Thank you Dutch. Thank you team for putting up with me. I don’t make it easy.