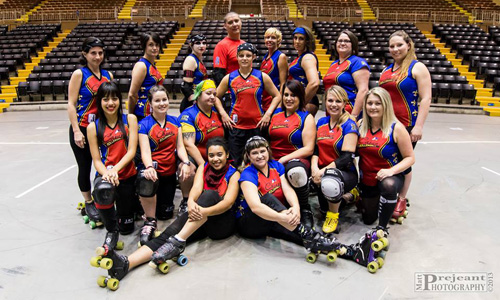 Cajun Rollergirls is a not-for-profit organization based in the Tri-Parish area (Terrebonne, Lafourche, St. Mary parishes) of southeast Louisiana that aims to have a positive impact on both the lives of its skaters and the communities of Louisiana’s Cajun Country through expansion of the sport of women’s flat-track roller derby.

We are a proud member league of the Women’s Flat Track Derby Association (WFTDA), the international governing body for the sport of women’s flat track roller derby and a membership organization for leagues to collaborate and network.

What do we do?

The Cajun Rollergirls foster the empowerment of women by promoting athleticism, sportsmanship, teamwork and volunteerism. In addition to increasing recognition of women’s flat-track roller derby, we seek to support the community with volunteer work and fundraising for area organizations.

It all started in March 2008 with a call out for skaters from Olive Torture.

In August 2008, CRG held its first scrimmage game at Wheels R Rollin skating rink in Schriever. The competitive teams were a blended combination of players from the Cajun Rollergirls, Big Easy Roller Girls and the Austin Hustlers. After a short boot camp conducted by the Austin Hustlers, a Black team and a White team were created. The Black team emerged as the victors.

After the hurricane season of 2008, our league did not come together until November, when the league competed in a flag football tournament held by the Nicholls State University Human Performance Majors Club. CRG helped collect $200 in team sponsorships, benefiting Komen for the Cure, a breast cancer research support organization.

CRG saw its first installation of officers in 2009. It was also the first year the CRG was invited to participate in San Fermin Nueva Orleans, a Gulf Coast derby tradition.

In November 2009, CRG held its first large-venue gameat the Warren J. Harang Municipal Auditorium iin Thibodaux, Unfortunately, because of low participation, the leauge was only able to play by teaming up with the Pearl River Swamp Dolls.

The new recruits gained during the 2010 season allowed for the scheduling of the first competitive season in the history of the Cajun Rollergirls.

The rest, as they say, is history! 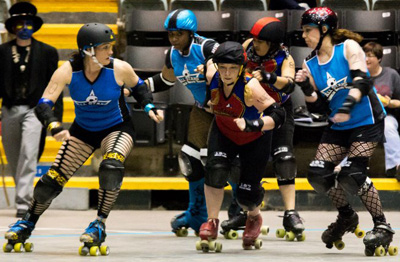 About the sport of roller derby

Is roller derby real? Isn’t it just a show?
Yes, derby is real! The sport has come a long way from its origins and through the years. It is a genuine athletic competition that requires skill, athletics, strategy, agility, speed and strength. And as if that wasn’t enough, the sport requires that you be good at taking a hard hit here and there. We live for our sport, not for a show. But attending a bout can truly be an amazing event!

Can players get hurt?
Yes. Roller derby is a full-contact sport. Injuries do happen, but we try to make it as safe as possible for our skaters, staff and fans alike. We strictly enforce the wearing of safety gear, fair – not dirty – play, and every skater is required to learn HOW to fall and HOW to dodge a hit before her wheels ever touch a game floor. For the most part, injuries are minor (sprains, pulled muscles), but there are no guarantees. While we cannot ensure that every skater will never get hurt, safety is a top priority. After all, injured players cannot PLAY!

How do is the game played?
For a basic rundown on how a roller derby games is played, view the video below:

Jam: A jam is a two-minute period of action in a roller derby game. An unlimited number of jams can happen in any period. Each jam can last up to two minutes. After each jam is over, the teams have 20 seconds to get in formation for the next jam. If a skater is missing when the 20 seconds are up, her team just skates with one less player. Each jam begins with one whistle blast to start. Four short whistle blasts means the jam has ended. A jam can end because time ran out on the jam clock or the lead jammer called off the jam.

Pivot: Determines that pace at which the pack skates. She is the last in the line of defense for her team. She is also the only player on the track that can relieve the jammer if the star helmet cover is passed to her (a “star pass”). The pivot wears a helmet cover with a single stripe down the middle.

Blocker: Works with other two other blockers on her team and their pivot to move their jammer through the pack — while at the same time preventing the opposing team’s jammer from passing through. Blockers do not wear helmet covers.

Jammer: Scores the points for her team. Wears a helmet cover with single stars on each side. Starts each jam 20 feet behind the pack. Must skate through entire pack once before she can start earning points. For the hips of each skater of the opposing team she passes legally, she earns a point for her team. The first jammer to make her way through the pack without earning a penalty earns the status of lead jammer. Lead jammers are have the unique power to stop the jam anytime before the two-minute jam clock expires, if they so choose, usually to prevent the opposing team’s jammer from scoring further points. 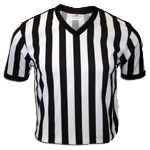 Referee: Referees, either male or female, keep track of the action to ensure that the rules of flat-track roller derby are being followed. Each game will have no fewer than three skating referees and no more than seven skating referees total. A full staff of seven referees is strongly encouraged, and it is also strongly encouraged for at least one referee to be WFTDA Certified. No more than four referees will be positioned inside the track. Referee positions include: 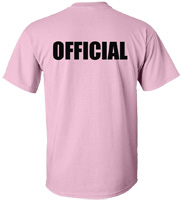 Penalties: Actions that actions that warrant penalties during gameplay, according to the WFTDA Rules of Flat-Track Roller Derby. These include:

For a chart of referee hand signals for each penalty, view the WFTDA Official Hand Signals.

For additional information on the Rules of Flat Track Roller Derby, watch the video below, or visit the WFTDA website’s Rules section to view the detailed rules by which CRG and other WFTDA-member teams operate.